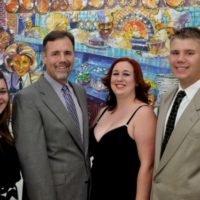 Dr. Edward Olff grew up in Smithtown, New York. After completing his studies at The State University of New York at Stony Brook and Suffolk County Community College, he attended The National College of Chiropractic, now the National University of Health Sciences, in Lombard, Illinois, graduating in 1987 with a Bachelors of Science Degree in Human Biology and a Doctor of Chiropractic degree. His chiropractic career began in Hayward, California, where he worked for two years before moving to Fresno and joining Blackstone Chiropractic. In addition to his chiropractic education, Dr. Edward Olff completes post graduate schooling each year. Dr. Ed Olff has also earned an advanced proficiency rating in Activator methods techniques.